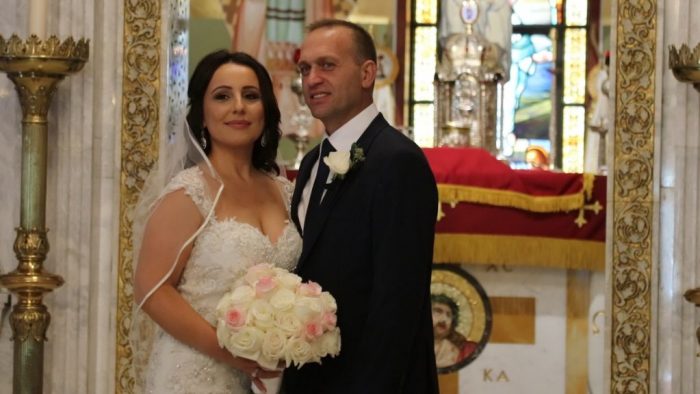 Kela and Genti met on March 17th, 2011 through mutual friends. Their first official date was at Ruth Chris Steakhous in Tampa. The dinner lasted almost 3 hours because they had so much to talk about. Genti couldn’t believe he found an intelligent, young professional yet so adventurous and outgoing. He proposed to her 2 years later in the US Virgin Islands. Kela was attracted by his gentle side, intelligence, work ethic, and most importantly his view on family.

A Greek Orthodox Ceremony is steeped in traditions that go back to biblical times.

The EXCHANGING OF RINGS are done early in the ceremony, as the Koumbara (sponsor), exchanges the rings three times, after the priest touches the foreheads of the bride and the groom with the rings.

CANDLES: The bride and groom each hold a candle which remind them of the light of Christ who is both with them in the ceremony and in their future married life together.

CROWING. Stefana is used for the crowning of the couple. The Crowns are signs of Glory and Honor as the bride and groom are crowned as King and Queen of their homes, which they will rule with wisdom, justice, and integrity.

COMMON CUP is where the bride and groom share unconsecrated wine symbolizing the sharing of all that life has to offer.Tampa Bay Greek Wedding at St Nicholas Greek Orthodox Church in Tarpon Springs. The Greek Orthodox Wedding is steeped in ritual and symbolism.

CEREMONIAL WALK is usually what Greek Weddings are known for, is where the bride and groom walk around the altar with the Priest and the Koumbara three times symbolizing their promise to preserve their marriage until death.